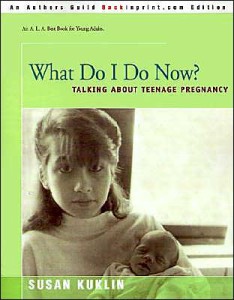 “Please say it’s the flu,” a teenager begs his girlfriend. It’s not. She’s pregnant. Author Susan Kuklin talks with many teenagers and health providers about teenage pregnancy. Whether the choice is to keep their babies, place them for adoption, or have an abortion, their decisions may be the most important they ever have to make.

Reviews
“Kuklin interviewed teens and their families from many racial, ethnic, and socioeconomic backgrounds, as well as medical and counseling personnel of organizations that assist those facing unplanned pregnancies. From these interviews and her observations of a Planned Parenthood unit, an adoption agency, a facility that performs abortions, and a hospital clinic, she presents in a clear and detailed style the pros and cons of options available to pregnant teens and their consequences.”—School Library Journal

“[Kuklin] takes [an] investigative approach in interviewing young women and men of varied socioeconomic groups, affiliated with a wide spectrum of agencies. The emerging picture is both optimistic and discouraging, but a repetitive pattern stands out: immaturity, of the pregnant teens and often of their parents as well (for instance, a woman who refers to her grandchild as her son). Time and again, the baby changes a couple’s relationship; almost always, the attitude of the young mother’s mother is pivotal to whether the girl will choose to abort, to keep the baby, or to put it up for adoption. Matter-of-factly, Kuklin spells out the daily routines of these young mothers. The message isn’t lost: this is no picnic. Adeptly, she folds information in–e.g., you can get pregnant again before your period returns. Throughout, there is emphasis on building a support system, whatever the decision. A fine job. B&w photos; glossary.”—Kirkus Reviews