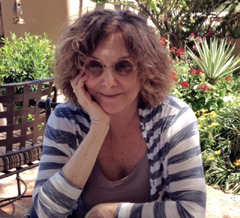 When I was about age eight, I decided to become a prima ballerina. I took ballet and tap three-times-a-week and studied French—the language of dance. Once I became a teenager, I switched from dance to theater. I would definitely, definitely become a stage actress—a very, very dramatic actress. Not such a good idea, my family thought, but they didn’t dash my dreams. Fortunately my hometown, Philadelphia, was a city where shows held out-of-town tryouts before going to Broadway. I was constantly at the theater. Summers at the beach in Atlantic City gave way to long hours painting sets at Philadelphia’s summer stock theater, the Playhouse in the Park. 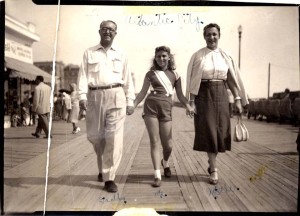 On the Boardwalk in Atlantic City with my parents. I was about nine or ten.

I majored in theater at New York University, and also studied acting at the Herbert Berghof School. Becoming a character in a play was so much fun. It was not that I didn’t like being me, I was simply curious to know what it was like to be someone else.

While in graduate school [also at NYU] I began to direct plays. Acting trained me how to interpret a part, but directing taught me how to look at the theater’s big picture. I loved it.

Then my uncle bought a Leica, and changed my life. We explored our world through the viewfinder of his camera. I pretended that my eyes were a 35mm camera lens, and I’d walk down the street composing mental photographs. Somehow this diverse background merged together when I became a photographer and nonfiction writer. 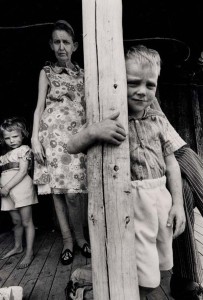 My future-husband, Bailey, and I got married and moved to Knoxville, Tennessee. While Bailey taught at the University of Tennessee Law School, I became serious about photography. He used all his savings to buy me my very own Leica for a wedding present. What a guy! For two years, I trekked, climbed, and drove up and down the Appalachia Mountains, photographing families with the assistance of a wonderful, local Planned Parenthood group. I tried to make pictures like favorite photographers, Walker Evans and Dorothea Lange. In fact, Evans photographed in those same hills some forty years earlier. Life in Appalachia seemed frozen in time.

When we returned to New York, I took my portfolio, Appalachian Families, to art directors at newspapers and magazines. Doors slammed. Some art directors laughed and said my black and white photographs were old fashioned. No one would hire me. Then, lo and behold, I started to get assignments with major magazines and newspapers.

During one assignment I drove around with the police and undercover agents in the South Bronx. It was scary and exciting. Although bullets were flying and buildings were burning in the area, I felt safe behind the lens of my Leica. It was not safe. [Do not try this; it was really a dumb thing to do.] Selections from this and another photo essay about AIDS are in the permanent collection of the Museum of the City of New York. 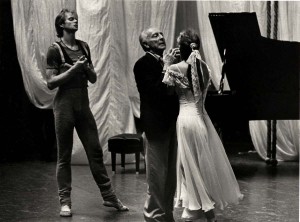 For another assignment, I photographed George Balanchine as he rehearsed the magnificent dancers of the New York City Ballet. It was glamorous, very glamorous, but I was constantly worried. Was the lighting too dark? Am I at the wrong angle? Can I capture fast movement with a still camera? And, the biggie, did I put film in the camera? My confession: that actually happened once.

One assignment changed my life again. Professor Herbert Terrace at Columbia University invited me to be the photographer on a cutting-edge scientific experiment that had to do with language and animal behavior. The project asked the question: can a chimpanzee learn language? Nim Chimpsky—named after the linguist Noam Chomsky—was raised like a human child. He was taught to imitate American Sign Language because apes do not have vocal cords allowing them to speak as Homo sapiens. Very quickly Nim learned about 150 words. 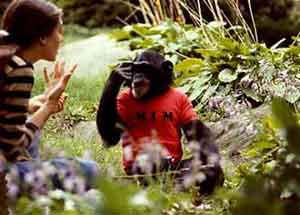 The photographs for this project were used in two books, one of which was a children’s book called The Story of Nim, The Chimpanzee Who Learned Language, written by Anna Michel (Knopf). I fell in love with children’s publishing. And it has been my home ever since.

The thing I love about being a nonfiction author is that I get to spend time with people from all walks of life. From ballet stars to teenagers on death row, my work as a writer and photographer of contemporary nonfiction for young people has given me a front row seat at the fascinating, infuriating, complicated, mysterious theater called life.

Just for fun:
You can click this link from TeachingBooks.net to hear me pronounce my last name.