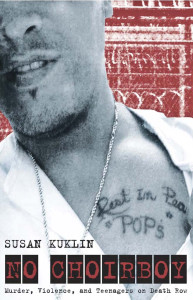 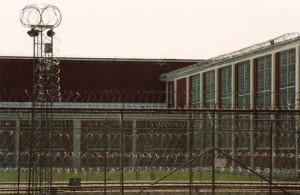 Between 1990 and 2005, only eight countries in the world still sentenced people younger than eighteen to death for their crimes — Iran, China, Nigeria, the Democratic Republic of Congo, Saudi Arabia, Yemen, Pakistan, and the United States of America. No Choirboy takes you into America’s prisons and allows inmates sentenced to death as teenagers to speak for themselves. In their own voices – honest and uncensored – they talk about their lives in prison and share their thoughts and feelings about how they ended up there.

Susan says:
The focus of the book is on the individuals – both actor and victim – whose lives are forever changed by violence. But there is more I’d like to share with you. Visit this page of my site to find discussion questions and many facts I learned while researching the book.

Reviews
“Kuklin tells five stories here; four are about young men who committed murder before they reached the age of 18, and one is the story of a victim’s family. Each narrative presents a picture of a troubled youth who did something he later regretted, but something that could not be undone. Within these deftly painted portraits, readers also see individuals who have grown beyond the adolescents who committed the crimes. They see compassion, remorse, and lives wasted within the penal system. Some of the stories tell of poverty and life on the streets, but others are stories of young men with strong, loving families. One even asks readers not to blame his family for his act of violence. Most of the book is written in the words of the men Kuklin interviewed. Their views are compelling; they are our neighbors, our nephews, our friends’ children, familiar in many ways, but unknowable in others. Kuklin depicts the penal system as biased against men of color, and any set of statistics about incarceration and death-row conviction rates will back her up. She also emphasizes that being poor is damning once a crime is committed. She finally introduces Bryan Stevenson, a lawyer who has worked on the cases of two of the interviewees, who talks about his efforts to help those who are on death row. This powerful book should be explored and discussed in high schools all across our country.”—School Library Journal, starred review

“…This eye-opening account will likely open minds and hearts, too, and would serve as a good nonfiction read-alike companion for Walter Dean Myers’s Monster. The book concludes with solid back matter – notes, glossary, bibliography, and index.”—Hornbook Magazine, starred review

“[Kuklin’s] latest title, about individuals who received death-row sentences while they were teenagers, is another direct, compassionate, and eye-opening inquiry. The prisoners’ words, drawn from Kuklin’s interview transcripts, form the bulk of the narratives, but Kuklin’s voice frequently cuts in with details about the events leading up to the alleged crime, legal issues, and the prisoners’ backgrounds. Some chapters also include commentary from the prisoners’ lawyers and the prisoners’ own writing (one, Nanon Williams, is a published author). The mix of voices makes for a somewhat chaotic but riveting whole that combines powerfully with the occasional photos and hand-drawn portraits of the subjects. Kuklin presents, with signature frankness, the men’s memories of their young lives; the murders, for which some claim innocence; and the brutal realities (including rape and other acts of extreme violence) of incarcerated life, first on death row and then in maximum-security prison, where most of the prisoners are now held. In unforgettable later chapters, families of prisoners and victims both speak about their grief and loss, and the closing section focuses on a world-renowned anti–death penalty attorney. This isn’t a balanced overview of capital punishment. Instead, it is a searing and provocative account that will touch teens’ most fundamental beliefs and questions about violence, punishment, our legal and prison systems, and human rights.”—Booklist

“Kuklin offers a series of interviews with young men on death row, their families, and the families of violent crime victims who oppose the death penalty. Speaking with inmates and their lawyers, she highlights flaws in the American justice system that can allow evidence to be blatantly ignored or one person involved in the crime to become a scapegoat for others. She aims to show that a crime, no matter how heinous, does not define a person’s entire life. Such is the case of seventeen-year-old Nanon Williams, who was sentenced to death for murder despite conflicting testimony from the key witness. In prison, Williams became a scholar and writer. He published several books and a prison newsletter, becoming the reluctant keeper of the stories of the death row men. Ironically death row has proven to be one place he could focus and educate himself. The young men featured made serious and terrible decisions, but each has other contributions to offer the world. Basically a critical view of the American legal system, this book’s arguments apply not only to teenagers but also to any person sentenced to die in a flawed legal system. It is a good nonfiction choice for boys, and teachers may want to teach it in a unit on the death penalty.”—VOYA

“Death Row inmates sentenced to die for crimes they committed as juveniles are profiled here, as well as victims’ families, the family of one man already put to death and the lawyer who founded the Equal Justice Initiative of Alabama, an organization focused on the rights of indigent prisoners. Kuklin lets the inmates tell their stories in their own words, providing some minor narration about legal points. Readers may be surprised to learn of the diverse backgrounds of those convicted of capital crimes: Not all came from broken homes or disadvantaged backgrounds. Some didn’t have a criminal record prior to their convictions. This is an excellent read for any student researching the death penalty or with an interest in law and sociology. The author/photographer paints the convicts and their families as neither wholly good nor bad, but human. The convicts themselves speak with a wisdom that can only come from years of negotiating the dangers of prison life, and their stories may change more than one mind regarding what makes a criminal.”—Kirkus Reviews