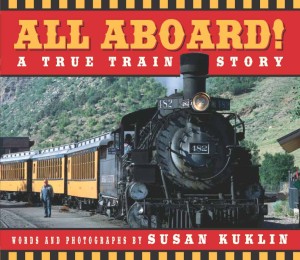 Here’s a lesson plan for the book, exploring onomatopoeia for younger students.

Travel through the Colorado wilderness on the Durango & Silverton Narrow Gauge Railroad with this picture book about steam engines. Founded by the Denver & Rio Grande Railway in 1880, the Durango & Silverton Railroad was used originally to haul silver and gold from the San Juan Mountains. Through the years, this railroad has established a unique history. During WW II its equipment was used to process uranium for use in the war, and in the 1960’s it was used as a sight for several Hollywood movies, including Butch Cassidy and the Sundance Kid. 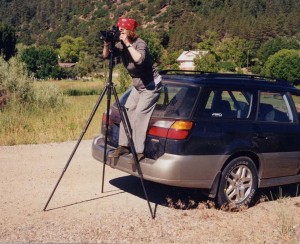 I’m photographing Engine 482 as it whizzes by.

Photographing All Aboard was an amazing experience. Not only did I get to travel to one of the most beautiful parts of America, I met wonderful, dedicated, fun people. After a very short while I felt as if the trains were alive. They were powerful, fire-breathing dragons, each with her own personality. I decided to interview my new friends, the trains. And they had a lot to say. I taped their whoo-whoo-whoos, clickety-clacks, and squeak-squeaks as they traveled up and down the mountains. Later, I added the train sounds to the story. This way the trains can talk to you. And you can talk back. You should try it sometime.

“The minimal text is like poetry: ‘Fire blazing/Water steaming/Chugga-chugga/Wheels rolling.’…this well-designed book brims with bright color and exceptional photographs…The accompanying text has some great descriptive words (clickety-clack, hisssss, whoo-whoo), which will introduce children to the concept of onomatopoeia. Kids will also pick up some basic train vocabulary, such as track, trestle, and smokestack.”—Booklist 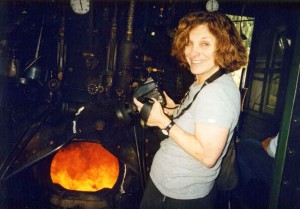 Inside the fiery dragon!

“Kuklin’s photo-essay documents the passage of vintage steam locomotives (Durango & Silverton Narrow Gauges, to be precise) as they chug through the Colorado Rockies and across a series of crisply designed, strongly horizontal spreads. Brief captions trace the journey and drive home the sound effects: ‘Onto the trestle/Over the river/Clickety-clack/Along the track’ (all train noises are set in oversize, color 1890s-style type). Pages alternate from one bold color to another, while borders along the top and bottom of the spreads effectively echo train tracks. In Kuklin’s most impressive photograph, the train snakes around a cliff at 7,200 feet above sea level, as sun glints off the striations and corrugations of rock.”—Publishers Weekly