Two books in one!

Thinking Big is important to eight-year-old Jaime Osborn. Jaime is a dwarf. Her body will grow to average size, but her limbs will always be short. Jaime is one of the Little People of America. Hornbook Magazine called Thinking Big “positive” and “reassuring” and Publishers Weekly called it “special in every sense.”

Doug the black Labrador is just a pup when he comes to spend a year with George and his foster family. Afterwards, Doug will become a guide dog for a blind person. Since George has problems with his eyes, it’s possible that he will need a dog guide one day. Mine for a Year is a remarkable true story of a boy and a dog. 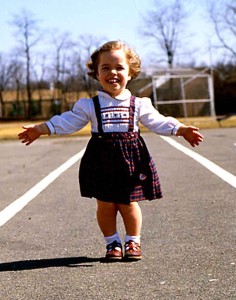 Jaime tells what it is like to Think Big

Reviews of Thinking Big:
“Kuklin has produced the first photo-essay to profile the life of an achondroplastic dwarf, and she’s done an inspiring job. Eight-year-old Jaime is neither ashamed nor professionally cute. She proudly exclaims, ‘Hi, this is your lucky day. You’ve just met your first dwarf.’ Kuklin looks at ways Jaime is the same as other youngsters (she likes to have her hair curled, and reads to her little brother), and ways she is different (she is double-jointed and less bothered by the cold than average-size people). Jaime’s problems being teased and needing special medical care aren’t ignored; guidance from her gentle family and from Little People of America helps. There’s an epilogue for adults; readers of all ages and sizes will be intrigued and enlightened. The book is special in every sense. “—Publishers Weekly

“A photo story about an eight-year-old girl who is a dwarf. Although Jaime’s body is normal size, her limbs will always be short. This book reveals her relationships with her family and her friends and the difficulties she must face. It is told with compassion and humor, as Jaime takes off her shoes to climb into the refrigerator to get food on the top shelf or slides down the steps on her bottom because the steps hit her at the knees. Her little brother is five and already head and shoulders above her, but she is still his “big sister” and reads to him. She takes part in all normal activities, such as Brownies and playing in the park, but when she is selling Girl Scout cookies someone must go with her to ring the doorbells. Kuklin also notes special characteristics of dwarfs, like double-jointedness and the fact that all of the fingers of each hand do not touch. The good-quality black-and-white photographs illustrate the strong family support that Jaime receives. An afterword in smaller type explains dwarfism and offers more background on Jaime’s life. A positive book that should be of interest to libraries as it covers a subject about which little has been written.”—School Library Journal