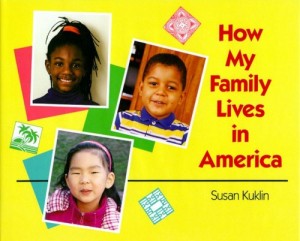 Sanu is learning how to braid her hair and cook the same African meal her father makes. Eric loves to play baseball and dance the merengue with his friends and family. April works hard on her Chinese writing and tries to keep up with her family’s challenging games.

Reviews
“A glimpse at how three families impart a sense of ethnic identity to their children. Five-year-old Sanu’s father is from Senegal. Her mother grew up in Baltimore. Sanu and her father buy food for a traditional dish he will prepare and share with other relatives. Eric and his mother were born in New York City, while his father is from Puerto Rico. When relatives gather at their house, they like to dance the merengue. April’s parents were born and raised in Taiwan. On Saturdays she and her siblings go to Chinese school to learn calligraphy. All three families live in middle-class urban settings. All three children have sensitive, caring parents; two of them have strong ties with extended families. Each child’s first-person narration is simple and uncomplicated, with occasional humorous touches. One can almost hear them speaking.”—School Library Journal

“A multicultural consciousness-raiser in which three children, each with at least one parent who did not grow up in the US, describe some of their adapted family customs. Food is a common theme: Sanu’s African father invites friends over for a special meal of tiebou dienn, eaten on the floor from a common bowl, and “while we eat, we hear stories about our parents when they were little in Senegal and in Baltimore”; Eric enjoys baseball, the merengue, and especially arroz con pollo y habichuelas with his Puerto Rican family; Taiwanese Chin Lan (‘My name in America is April’) has cold sesame noodles, tsu ma liang mein, in school, and takeout pizza for dinner. The young narrators, speaking in an easy, unforced way, invite readers to see them both as individuals and as proud members of ethnic groups, but not, ultimately, as so different from children anywhere. The practices they describe are a well-chosen blend of the exotic and the mundane, enhanced many lively, natural-looking color photos. Recipes at the end (except for the pizza).”—Kirkus Reviews

“The rich variety of lifestyles and cultural heritage in the U.S. make it a treasure chest unmatched anywhere in the world. Photo-essayist Kuklin makes this point photographically. We meet 3 families from different parts of the world. Sanu’s father is from Senegal, Eric’s family is from Puerto Rico, and April’s family is from Taiwan. The color photos show the families eating, shopping, playing games, or talking about their culture. The text is brief but the emphasis is on family life.”—Children’s Literature