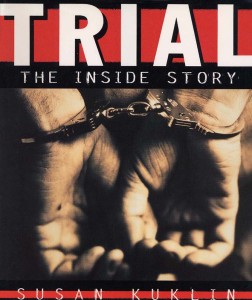 Over one third of high school students don’t know basic civics. Here is an exciting way to teach them America’s system of justice. Susan Kuklin gives readers the inside story of a dynamic contemporary court case and uses exclusive interviews with all the participants to explain what happened. Kuklin had unparalleled access to the prosecution, the defense, the judge, and even, after the case, the jury in a dramatic case involving a kidnapping ring in New York’s Chinatown.

Reviews
“A fascinating account of a kidnapping trial in New York City involving illegal Chinese immigrants. An outline of procedures from the time a crime is committed until a verdict is reached and a chronology of this particular case set the stage for the actual account. With all the drama of a television courtroom show, the facts of the case unfold. Excerpts of real testimony plus descriptions of participants and their emotional states at all stages of the trial heighten interest and build an atmosphere of suspense. Legal concepts are clearly defined in the text and in sidebars as they arise. Not only are the lawyers’ actions described but the reasons behind them are revealed as well. Photographs of the judge, lawyers, and investigators plus some of the actual photographic evidence bring the proceedings to life. The book’s excellent organization and a wealth of relevant and useful supplementary material create a revealing document. Eminently readable and information rich, this absorbing work will have wide appeal.”—School Library Journal

“In a fascinating approach to an unusual subject for young readers, this noted non-fiction author describes the intimate details of an unusual trial. Illegal immigrants are exploited through extortion and violence in a way of life hidden from most Americans and not often prosecuted. In this case, a kidnapper is held to account for his part in holding a Chinese immigrant for ransom from his family. The question uppermost is the actual identity of the perpetrator. Having followed the case inside the courtroom and conducted interviews with many of the protagonists, Kuklin is able to offer direct quotations from the transcripts, the presiding judge, the assistant district attorney, the defense lawyer, the detectives, and some members of the jury, who give a vivid picture of the case. She also gets into the minds of the people involved as they discuss their strategies, their anxieties, and the pressures that face them: the defense lawyer is passionate in his concern for getting justice for his client; the prosecutor articulates the social responsibility she feels towards the victims. Everyone depicted represents the highest quality of behavior in a criminal courtroom. Short episodic chapters headed by a phrase from the text or a bullet or two that describe the action give the impression of a scene from the TV series Law and Order. In a feature designed not to intrude on the telling, sidebars explain points of law. Notes, a bibliography, and a glossary give suggestions for further reading and additional information on legal terminology. Photographs taken in the courtroom by the author or reproductions of ones introduced into evidence add to the authenticity of the text. A good readandan absorbing look inside a trial by jury.”—Kirkus Reviews