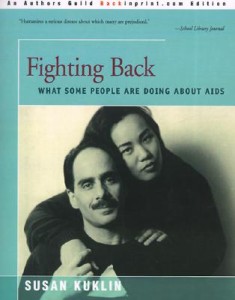 Fighting Back focuses on a team of volunteers and their buddies, people who are living with AIDS. As both buddies and caregivers describe their personal experiences, we understand just how important it is to fight back.

Reviews
“Photojournalist Kuklin spent nine months following the lives and deaths of Gay Men’s Health Crisis volunteers and their clients (the word victim is not used) with AIDS. The result is exactly what the title implies—a realistic, yet moving discussion of PWAs (people with AIDS) trying to live with the disease, and the cross-section of helpers who provide household help and emotional comfort. The strength of the book lies in its real people—both volunteers and PWAs hail from across the spectrumgay and straight, men and women, teens. Their backgrounds and feelings are clearly expressed in these pages…this is an excellent, compassionate addition…Further, in view of Kuklin’s own body of work, this comes across as her strongest, most skillfully wrought project yet.”—Publishers Weekly

“Kuklin adds to the growing body of AIDS-related literature with this moving documentation of a group of people who volunteer to help people with AIDS by providing support for them and doing their daily chores. The volunteers, a team of “buddies” for New York City’s Gay Men’s Health Crisis, are a diverse group of men and women, straight and gay, who have chosen to make a difference in the fight against AIDS. The portraits of the volunteers and their clients show the physical and emotional strain that can come of dealing with a debilitating illness daily, while they also reveal depths of courage and strength. Kuklin includes much information regarding the transmission of the HIV virus, antibody testing, orthodox and alternative treatments, and aspects of day-to-day living with the disease. Powerful black-and-white photos of the people mentioned in the book make the stories all the more personal. The book humanizes a serious disease about which many are prejudiced, and it encourages understanding. Certainly this book should be shared widely among people whose lives have been affected by AIDS. The level of commitment shown by the team of buddies and the spirit of the PWAs will speak to everyone…”—School Library Journal, starred review