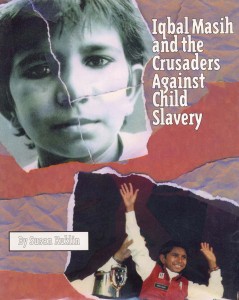 An account of the former Pakistani child labor activist whose life and unexplained murder exposed the world to the evil of child bondage. In December of 1994, twelve-year-old Iqbal Masih was honored as a hero. Just two years earlier, he had been a slave, condemned to a lifetime of bonded labor in a Pakistani carpet factory. And five months later, he was dead, murdered in his homeland. Though he is gone, his actions inspired an international campaign of middle-school students and adults that is helping to free and to educate thousands of child laborers. Here is the powerful story of Iqbal’s life and death, and of the movement that continues the struggle against child labor today.

Susan says:
Iqbal Masih was a modern slave in Pakistan who wove carpets twelve hours a day, six days a week. Sometimes he was chained to his loom. Sometimes he was beaten. Once free he became a brave and passionate speaker who helped free other children from slavery. Click here to learn more about Iqbal and the school that bears his name.

Reviews
“Kuklin discusses modern child labor in developing countries where youngsters work in carpet factories, brick kilns, and workshops making jewelry and other goods. Poorly paid, uneducated, and often mistreated, these “bonded laborers” are made virtual slaves by their families’ desperate poverty. The author focuses on two figures prominent in the struggle to combat the exploitation of children in Southeast Asia. Eshan Ullah Khan has led the efforts in Pakistan through his Bonded Labor Liberation Front, in cooperation with other organizations throughout the world. But the most colorful figure is Iqbal Masih, who at the age of 10 escaped from a carpet factory to become an articulate spokesperson. His death by shooting in 1995, on a return visit to Pakistan, ended his brief life but underscored the importance of the issue of child labor in the modern world. Numerous black-and-white photographs of children and labor leaders appear throughout the text.”—School Library Journal

“…book is as much a call to action as an account of child slavery and the struggle against it. In all her fine books, Kuklin roots the general issues in the personal experiences of individual people. Here the emotional center is Iqbal Masih, a charismatic Pakistani boy. Sold into slavery at age four, he was freed six years later by a human rights group. He became an activist speaker in Pakistan and Europe and came to the U.S. in 1994. On his return home, at age 12, he was murdered. Readers will relate to Kuklin’s outrage about Iqbal and also about the suffering of bonded children everywhere and the global markets that benefit from family poverty and illiteracy. Dramatic black-and-white photos show the charismatic Iqbal speaking out in Pakistan and Boston; many pictures from several countries document small children doing forced labor, even chained to machines. A long final section describes what human rights groups and particular U.S. schools are doing to organize boycotts and protests. Kuklin’s documentation is an integral part of the story, including Web sites and resources for those who want to get involved and make a difference.”—Booklist